There are three new custom scenarios available from Angrod (Hieronymus). Mons Argaeus is a timed mission.

Can you complete three tasks set by Caesar, and achieve perfect prosperity and culture, before the volcano erupts?

The other two, Mazaca and Roma et Nero are sandbox missions. You can find all three of them here, in the custom scenarios section of the the downloads.

Bodiciaus is another custom scenario from GaiusHorus (also known as ahk-horus). This scenario looks hard – lots of requests must be filled to gain favour. If you want a few hints (in German), try the Bodicia thread on the Caesar4.de forums.

Looking at this map, it seems that aqueducts can be built on sloping terrain, but only with the editor.

The results from our last poll about city ratings: Have you built a city with all ratings at 100?

In this poll we want to know if you have seen the monkeys. 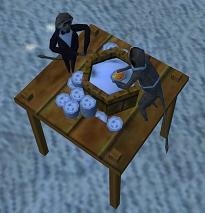 GaiusHorus (ahk-horus) has produced another custom scenario. This one is called Pecunia omnium, and the requirements are 360 marble, 360 wood, 360 sand, 120 weapons, 120 armour and 150,000 Denarii. A quick look at the map indicates that this won’t be easy. You can find it here.

For Season XX, the time trial is Alexandria again; the most denarii scenario is Ephesus, where it is quite possible to accumulate a treasury of over a million denarii.

In the Empire, PantherX and dragon0042 are still leading but Dalan has crept up to fifth place with seven cities and over 200,000 population.

A little piece of OD, the amazing Travelling Thread, has arrived in the Town Square. Drop in, have a look, say hello if you feel like it. It probably won’t stay around for long.

This week, we are asking about the ratings. Have you built a city with ratings of 100 for culture, security, prosperity and favour?

The results of our last poll: Do you play with the Day/Night Cycle turned off?

For those who didn’t know, choose Settings from the main menu and un-tick the Day/Night Cycle checkbox on the video tab.

You can see all previous poll results here.

Angel Zen is writing an article on gaming in different cultures:

How do you think gaming is viewed in different cultures outside of the USA? StarCraft is very big in South Korea (so much so that they have musicals and dramas based on the game), MMOGs are very popular throughout Asia, and strategy games such as Knights of Honor, 1701AD, etc. are very popular in Europe; North America seems to be more about First Person Shooters – or is that all just a myth?

Seeing how we have a diverse staff and audience I thought I’d ask your views here. What sort of differences can you see between different cultures when it comes to gaming?

Zen would appreciate your view. Post it here, in the Gaming Discussions forum.

Season XIX is underway. There are four new maps this season: Argos, Cyrene, Tarraco and Viminacium. The winners for Season XVIII were majorbad, chrilla, vp26, Rnett (two firsts) and Morgana.

In the Empire, PantherX and dragon0042 are still unchallenged.