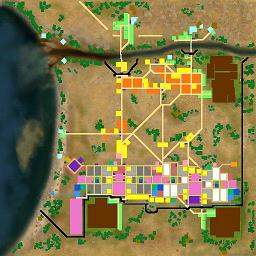 Angel Pecunia has uploaded a new version of her C4Minimapper program. It now handles custom scenarios, but saved games from custom scenarios require the original scenario to be available. If you are uploading custom scenarios or completed cities, you can use this handy little program to attach a minimap to your submission.

There are three new custom scenarios from GaiusHorus (also known as ahk-horus). They are called Roma Populi US, Roma Denaria US and Roma Militaria US; the titles tell you the theme. All three maps require culture, security, prosperity and favour ratings of 100, so expect them to be quite challenging. You can find them in the custom scenarios section of the downloads.

The results of our population poll: What is the highest population you have achieved in a city?

The new poll question is Do you play with the Day/Night Cycle turned off?

GaiusHorus has uploaded a new version of his scenario previewer, C4 Lister. As well as showing the minimap, goals and mission text, it now shows details of the trading cities, requests and invasions. It works on both the original and custom scenarios (as long as they are installed correctly). Find it here, in the miscellaneous section of the downloads.

The list of the top ten governors in the Empire remains unchanged.

There won’t be a new poll this Friday; from now on, we will be changing the poll fortnightly instead of weekly. We are low on ideas, and there haven’t been any suggestions from the community (see here).

Meanwhile, you can check out all the past polls here.

Angrod (Hieronymus) has created two new custom scenarios, Nicopolis and LXXXIV. Both use the same map but the former is a sandbox, while LXXXIV is a timed challenge that sounds irresistible:

Fail, and there’s no defeat screen. Instead you can sit back and watch as an earthquake wipes out your city – in fact, it will not give up until your population is reduced to zero.

You can find them both here in the Custom Scenarios.

HG is celebrating its 10th anniversary. Why not join the celebration and post in the birthday thread here, in the oldest surviving heaven – AoEH.

This week the poll is about population. Some of the Caesar IV Online players have managed huge cities (well, huge by Caesar IV standards). What is the highest population you have achieved in a city?

The results of last week’s poll: Are you playing the campaigns?

Previous polls can be found here.

There are several new completed cities from the Republic Campaign available in the downloads. Augustus Marcus has submitted Syracusae, Narbo, Mediolanum and Thessalonica. A ‘military’ Burdigala is also available. Find them here.

PantherX is still leading in the Empire.

This week the poll question is: Are you playing the campaigns?

Last week’s question was: When you build walls, how much of your city do you normally enclose?

Walling everything is the definitely most popular option. It may be more expensive, but at least you don’t have to worry about the security rating, or invaders burning the farms.

You can see all previous poll results here.

This article from the BBC Timewatch team may tell you more than you wanted to know about life and death in the arena. Five years of forensic analysis on bones from graves at Ephesus, have lead pathologists in Vienna to believe that the remains are from a gladiator graveyard.

A number of skulls were also found to have sets of up to three holes at odd intervals, consistent with a blow from a three-pronged weapon such as a trident.

If you live in the right region, you can watch the program too. Timewatch: Gladiator Graveyard on BBC Two at 2100 BST on Friday 11 May.

CBC is planning another Caesar IV contest. This one will be a team contest. This is a fun way to play a C4 map. You play at your preferred difficulty level and have a dedicated team forum where you can discuss game play and strategy with other team members. This is not just for English speaking players either. There are also two teams of French speaking players. Post in the registration thread at CBC if you are interested in participating.